The New Revolution in Sales Coaching

Most leaders agree the opportunity to improve sales performance through coaching is tremendous, including:

The International Coach Federation (ICF) estimates the number of professional business coaches worldwide has grown from 2,100 in 1999 to over 50,000 today. And for good reason: coaching inspires strong financial results.

Unfortunately, while companies are enjoying success with business coaching in general, sales coaching is often a major disappointment.

Commonly, we see sales managers and leaders who:

Indeed, coaching is often not a part of sales management at all.

Effective sales coaching starts with the realization that sales coaching, as a discipline, is not the same as other popular forms of coaching, such as personal-effectiveness and executive coaching.

Executive coaching can be inspiring and transformative over the long-term, but it is neither directive nor immediate enough to be effective for sales in the short-term.

This brings us back to sales managers. When (if!) they coach, they often focus exclusively on helping sellers win opportunities. Even then, they are frequently neither systematic nor rigorous about it. When this happens, they miss the opportunity to focus, motivate, and develop sellers so they can truly achieve top performance.

The ideal scenario for sales coaching is an intersection of three types: 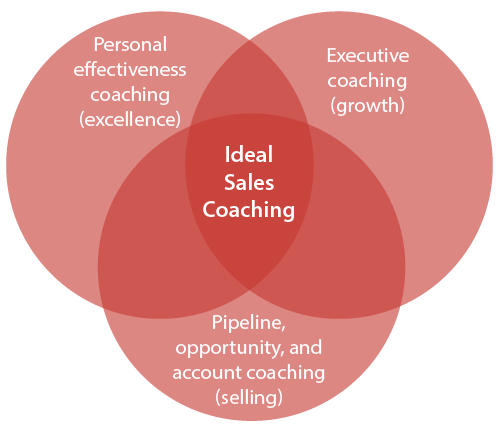 The New Revolution in Sales Coaching

Several years ago, RAIN Group began an experiment. Our hypothesis was that by applying a coaching process and method designed specifically for sales, our clients would see a dramatic improvement in their sales results. We crafted the process, implemented the system, and refined it over time based on the results achieved by our clients.

While we had success with sales coaching previously, after we designed and implemented this coaching system, our clients report between a 25% to 40% increase in sales activity, leads generated, average deal size, and close ratios.

But numbers like these fail to tell the story that individual cases bring alive:

Over the years, we've learned there are three critical components to sales coaching success.

Sales coaching works when the coach:

Attend to these three critical components and you can implement successful sales coaching in your organization and maximize sales performance. If you're not sure how to get started, RAIN Group's RAIN Sales Coaching program can help give your leaders the skills and techniques they need to help their team succeed.

When done well, sales coaching produces excellent results consistently. While it draws from practices in other coaching disciplines, sales coaching has its own characteristics and rhythm that make it stand apart as a distinct field.