My grandfather Sidney was raised during the great depression. Often hungry growing up, he learned the value of a dollar the hard way. It stuck with him the rest of his life. When I was in college, he never let me call him because he would say it was long-distance.

I told him that the distance was long, but the call didn't cost anything. Still, he could barely stay on the phone for 5 minutes. I could visualize the nickels clinking in his mind, making him uncomfortable with the cost of the call.

When I was around 10 years old, we went to Lechmere, a department store in our area. He wanted to buy a specific $30 Dustbuster. I figured he'd pick it up, bring it to the register, and pay for it. But no.

He found an associate on the floor and told him he wanted to buy it, but for $20. The associate looked shocked, but my grandfather kept working on him, asking for the manager.

The manager came and my grandfather didn't let up, trying one strategy after another. "I buy so much here. You don't want to lose my business." "This one also looks like it's been opened, maybe returned already." "It costs less at Sears I saw, but we're closer here so I came here first. I'll go to Sears next."

Eventually, we left with a new Dustbuster for $25. My grandfather turned to me and said, "Mike, everything is negotiable."

It was a part of his mindset to get the best price. His first strategy was making an offer below the stated price for what he wanted. Then he pushed the importance of his repeat business (I shop here all the time). Then he made a value challenge (this one has been opened already so it's worth less). Then a competitor challenge (Sears).

His goal: get the seller to cave.

It happens all the time. Buyers frequently test what we call "cave tolerance." The buyer says, "I want it, but I want it for less." All too often the response is, "Where do we need to be?" This opens the door to caving.

When some buyers know a seller is willing to cave, they push and push until the seller holds their ground. If the buyer and seller work together again, the buyer will know there is wiggle room in whatever price the seller puts forward.

Always trade for value. Don't drop price in a vacuum. Don't get bullied.

Like Essential Rule of Sales Negotiation #1: Always Be Willing to Walk, trading (and not caving) is about mindset as much as skill.

When pressed for concessions, some sellers want the sale so much they simply cave. Others value harmony so much that they are willing to make concessions to preserve the peace, giving in quickly and without asking for something of value in return. Others simply don't know what to do, so they open the door to caving.

The good news is that sellers with these habits can retrain their brains. When you know that giving unilateral concessions almost never leads to a good place, you'll catch yourself before you do it. Consider practicing the mantra "If you...then I. If I…then you." Say out loud a few times. "If you...then I. If I…then you." It'll remind you that you should never give something up for nothing.

At its core, trading is about reciprocity. It's about mutual give and take. It means putting the mantra "If you…then I. If I…then you." into practice.

Think of it this way: If you don't trade, anything they ask for that you are willing to concede must not have value. If it doesn't have value to you, don't expect the buyer to value it. By proposing trades, you are establishing two things:

Instead of allowing the pie to shrink, the act of trading can increase value for both sides. The classic trade is where both sides concede something of lesser value to them in return for something of greater value. This mutual gain is at the heart of collaborative negotiations. For example: "I can offer the customer more regular deliveries to off-set their warehouse space problem which is no problem as their facility is in the same industrial park as another customer. In return, they lengthen the contract to coincide with their planned factory refit."

Tips of the Trade

Changing your mindset is the foundation. Once you've steeled your mind to respond to buyer requests with requests of your own, there are several ways to maximize your trading success.

First and foremost, prepare your trading possibilities. Create a trade list with value assigned. Be creative and exhaustive. Consider both strategic and tactical agreement components.

Again, it all comes back to mindset. Caving is not an option. A senior seller at a company we worked with recently shared with us how ingrained trading had become to even casual conversations with long-term clients.

"We'd been working with this client—a cybersecurity firm—for several years. In the third year, the CEO came to me with a price pushback on our customization fees:

'Aren't you using similar materials as last year? Don't you know us well enough by now?'

I said to him, 'Yes, we know you well, but if we don't engage with each team we work with, they won't feel engaged going into the process. Plus, your business has changed a lot in three years, hasn't it? Our process is similar to what it was then.'

I could tell, however, he was hoping to get a lower fee. I asked myself what it was worth. Since our work has been so successful for them, I thought a case study would be well worth a fee reduction.

I asked my client, 'If we lower the fee, will you participate in a case study for us?'

In this case, it was easy. We had a good relationship with the client. But it would have been just as easy—but a mistake—for me to agree without asking for anything in return.

Sometimes it's less straightforward. However, if you know what's of value to the client, and the value to you of various trades, you'll be in the ballpark."

Learn about the other Essential Rules of Sales Negotiation: 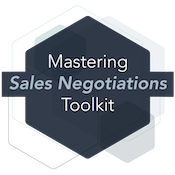 Get resources and tools to improve your negotiation outcomes in our Mastering Sales Negotiations Toolkit.
Download Now >>