The 6 Buyer Personas (and How to Sell to Them)

A while ago at a conference I had dinner with two people. The first—we’ll call her Janine—I had known since we worked together six years earlier. The second person—Ed—Janine and I had just met.

Janine described a sales challenge she was facing. She’d been working with two prospects at two different organizations, one for over a year and one for almost two. The typical sales cycle is 6 to 9 months, and these were both well beyond. She felt she was nearing a sale with both, but for all she knew, “nearing” might mean a year or two to go.

This is a fairly common sales challenge: the sale looks good, but it’s taking forever. Janine happened to be facing two at the same time.

As we talked, I asked Janine a number of questions. She believed that in both situations the buyers:

Both of these sales were in the mid-six figures (her typical sale is in the low six figures and is highly technical).

Janine had a strong relationship with both prospects. It was unlikely they were considering other providers, the solution was crafted jointly and conceptually agreed upon, and they expressed they were likely to move forward. Still, no decisions seemed imminent. Knowing Janine, I didn’t doubt her read on the situations.

When we got to this point in the conversation, Ed said, “If they haven’t bought by now, they’re not buying.” He then advised Janine to have the “fish or cut bait” conversation with each buyer. She might win and she might lose, but either way she can stop wasting her time and get on to other sales.

My reaction? This was probably the wrong advice, but I needed to know more.

Janine asked me if I agreed, so I asked several other questions:

This is where it got interesting. Janine told me both prospects are tactful and diplomatic, and it’s important to each that their whole team collaborates on the decision.

She also told me they believe in “slow and steady wins the race,” and that’s the way their organizations move. Since implementing her technology could rock the boat and have ramifications across their organizations, they wanted to make sure they took a good hard look at the likely outcomes on various systems and processes before committing.

Now I was sure. Our new friend had given Janine the wrong advice.

I shared my thoughts and gave her a series of ideas for how to move forward. I also told her that while these sales may happen, there’s a right way to proceed. On the other hand, there's no secret to making them happen tomorrow. If, however, she went “fish or cut bait,” she was likely to lose both opportunities.

She decided to try an experiment. “At this point, I’m willing to take a risk and try both pieces of advice. One with one prospect, and one with the other.”

Three days later, she had the “fish or cut bait” discussion with one. Two weeks later, she checked in with that decision maker and got no response. Six months later…still no response. He went dark on her and Janine assumed (rightly) that she had lost the sale.

The other sale closed four months after our conversation.

I’m not especially prescient—either prospect could have gone the other way—but there are reasons I predicted the sales would work out as they did.

Regardless of the business or emotional reasons why people buy, every buyer has personal preferences for how they like to buy.

There are multiple buying styles and preferences to consider, but the number isn't infinite.

There are six distinct buyer personas to get to know, learn to identify, and learn to help buy.

If you understand all six, can identify which ones your actual prospects resemble, and plan your actions to meet their personal buying styles and criteria, you’ll win more sales.

How to Identify the 6 Buyer Personas

We give the six buyer personas names because they have distinct and identifiable personalities. The names will help you remember who’s who.

Decisive Danielle is directive. She solves problems in a decisive, active, and assertive manner. She’s proactive, results driven, and wants to win. If you’re dealing with Danielle, she might seem pushy and overbearing, and may lack tact. She’s probably pretty demanding and wants things to happen her way and in her timeframe.

If you’re selling to Decisive Danielle, you should be decisive as well, and demonstrate willingness to take some risks on your end that can help her succeed. Don’t worry too much about conflict that may arise with Danielle—it doesn’t bother her, and she may even thrive on it. Building consensus is not her natural thing. Not only does she not like the idea of forming a committee, she doesn’t like the word. 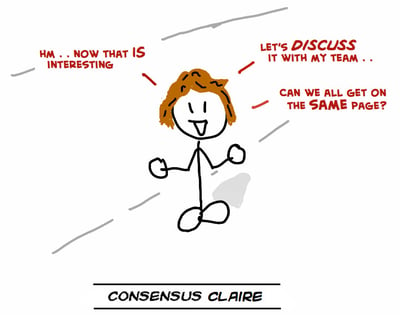 Consensus Claire is the yin to Decisive Danielle’s yang. Consensus Claire likes to solve problems with other people. She’s deliberative, tactful, diplomatic, and adaptable. In a world where people can be pretty blunt, it’s likely you’ll find her to be respectful of you and everyone else.

If you’re selling to Consensus Claire, keep in mind how important collaboration will be to her. You’ll have to work with her to understand and include all of the various buying influences. Make sure you facilitate discussions to draw out Claire’s and everyone else’s thoughts, needs, and questions. Don’t get frustrated if things take a while, and if you need to push back, do it tactfully. If she's going to buy, she will buy when she's ready and her team is on board. Need to make a big decision? Let's form a committee! 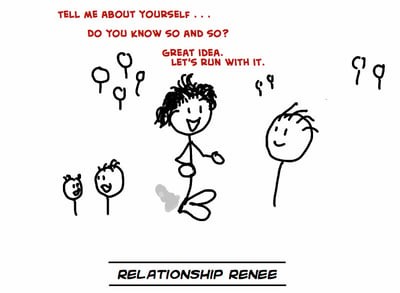 Relationship Renee is interactive. Social interaction and engagement are important to her. She's enthusiastic, a creative problem solver, a team player, and (naturally) a relationship-builder. She likes the big picture, and she's not shy about taking up a lot of air time in discussions. A question or two will really get her going.

If you're selling to Renee, you might want to keep technical details to a minimum. Make sure you hear her ideas, and share (and stoke) her enthusiasm with your own. Renee probably weaves fairly seamlessly between talking about business and personal matters. You might find the talk about her recent vacation or your son's basketball team goes on for a bit. When discussing ideas, don't overdo being the "voice of reason" or reality. What you might see as realism, she'll see as a downer. 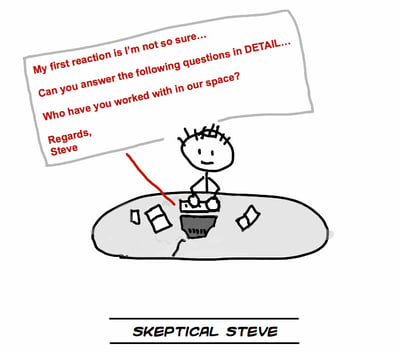 Skeptical Steve is the yin to Relationship Renee’s yang. Steve is introspective. He’s a reserved critical thinker. Skeptical Steve won’t embellish and doesn’t want you to do so either. It takes a while for Steve to develop trust with people, which can be great for you if you put in the time and effort. (By the way, Steve doesn’t mind being called a skeptic. He’s proud of the realism he brings to the table.)

If you’re selling to Skeptical Steve, don’t be surprised if he’s not super comfortable on the phone, and prefers email to communicate. Don’t be unnerved by lack of gestures or “feedback”; he tends not to be demonstrative one way or the other. Don’t try to be too personal or friendly too fast. And know that Steve might not share much at meetings, but you still need to make sure his needs are met or he could quietly block your sale. And you might never even know it. 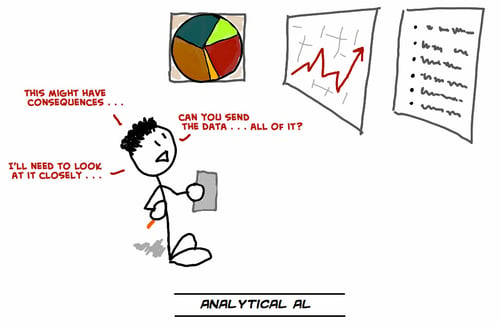 Past success is an indicator of future success. The way it’s been done, established methods, and data are important to Analytical Al. This doesn’t mean he won’t lead the pack and do something new, it just takes a lot of processing for Al to take a leap of faith. Al’s cautious. He follows rules, procedures, and established standards. He’s a comprehensive problem solver because he examines from all the different angles.

If you’re selling to Analytical Al, provide the backup and data that will help him make a decision. Appropriate detail will be important (and “appropriate” to him is more than most). At some point, because he can sometimes leave the data gate open longer than it needs to be, you might need to push back. But take special care not to criticize as he might take that more personally than most. If you push him too hard to move before he's completed his analysis, you can find yourself and your sale blocked. 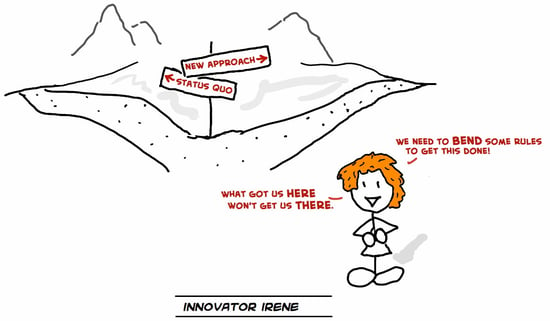 Innovator Irene is the yin to Analytical Al’s yang. When it comes to rules, procedures, and how things were done before, Irene couldn’t care less. While Al might say, “Past success is an indicator of future success," Irene would say, “What got us here won’t get us there.” Innovator Irene develops ideas and strategies independent of rules. She’s informal and solves problems creatively. Boundaries are for testing, pushing, and crossing…that’s what Irene says. (Anyone who has a three-year-old has met this side of Irene.)

If you’re selling to Innovator Irene, brainstorm with her. Stoke ideas for new ways of doing things. When you help set the agenda, allow it to become Irene’s agenda, not yours. Don’t shut down creative talk, but keep it moving forward as Irene can be on the disorganized side. Don’t give Irene the sense that she, personally, will have to do much detail work if she buys from you as details put her off. Instead, show how working with you will bring those ideas into reality.

Buyers Are a Mix of Buying Types

There’s so much more to learn about each buyer type, from their characteristics to how to identify them to how to work best with them, but these are the highlights.

Now that you’re aware of the different buyer personas, keep in mind that, while some personas may be better suited to buying what you sell than others, there are no “bad” buyer personas, just different styles and preferences which you will need to learn to match to increase your success.

Also note that while there’s usually a dominant buying persona that bubbles to the top, often one or two others influence and inform the buyer’s buying style and preferences. In our earlier example, the buyer was mostly Skeptical Steve, with healthy doses of Analytical Al and Consensus Claire. Since both sales could have been big, and a lot of indicators pointed to each sale being a strong win possibility, my advice was to understand the buying styles in play and facilitate a path forward that would work for them.

A core part of the RAIN Selling method is the 10 Rainmaker Principles. Rainmaker Principle #4 is “Think buying first, selling second.” Get to know the 6 buying personas and you'll give yourself and your team advice to win more sales in the right way for each type of buyer.

RAIN Group developed the 6 Buyer Personas to help sales people recognize different buying styles and preferences, and learn the skills to facilitate success with each of the personas. Descriptions of the 6 Buyer Personas were informed by advanced research around trait theory and business ambitions, proprietary algorithms, and innovative technologies from Talent Analytics. Validation was conducted on 50,000 completed profiles in conjunction with MIT and Harvard trained statisticians.