Introducing a New Book from the Leaders of RAIN Group

Written by Erica and Mike Schultz

Not Today is unlike the other books we’ve written and talked about in this space. While it’s certainly applicable to sales and selling—our clients have been benefitting from The Productivity Code and related content for years—it’s not your typical business or self-help book.

Not going to lie. There were many days we just didn’t want to write this book. It was a hard and emotional process. We share a lot about our personal lives and the journey we’ve taken to get where we are today.

But our son Ari wouldn’t let us off the hook. If you’re one of the millions of people who followed Ari’s story in the news and on social media, you won’t be surprised. Born with a congenital heart defect (CHD), Ari showed us how to do hard things with heart and purpose. And writing this book was just one of many ways he inspired, and continues to inspire, us.

In his 430 nights at Boston Children’s Hospital, Ari gained an acute awareness of the stress faced by other children with CHD and their families—something no child of five should have. So, it’s our great privilege and honor to donate a portion of the book proceeds during the launch period to two charities near and dear to our hearts: Live4Evan and The Ethan Lindberg Foundation.

Live4Evan provides financial and emotional support to families by providing them with temporary housing while their child receives congenital cardiac treatment.

The Ethan Lindberg Foundation serves families most affected by congenital heart disease by offering financial support, advocating for their needs, and inspiring them to grow through their journey.


Now, a bit more about the backstory that led us to writing this book and why it’s important for so many today 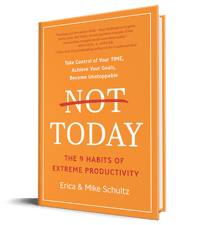 This post excerpted from Erica and Mike Schultz’s new book.

On February 16, 2012, at 12:58 am, Ari Francis “Danger” Schultz made his big debut. He came out screaming. He was perfect. We all sighed in relief. The delivery team let us snuggle with him for five minutes before whisking him off to the NICU. From there, Mike and a cardiology team escorted him over the bridge that connects Brigham and Women’s Hospital to Boston Children’s Hospital. Ari would have a few hours to adjust to life on the outside... and to prepare for his first surgery in a few hours. No rest for the weary.

In the first seven months of Ari’s life, we spent barely five weeks at home with him. He underwent two major open-heart surgeries to replace three of his four heart valves. It was a long road, but we were able to save his left ventricle, giving him whole-heart circulation.  Jackpot!

But the game was far from over. What was behind curtain number one could be either a trophy or a bear trap waiting to be tripped—or something in between. Damage had been done in utero to the ventricle we were trying so hard to save. Muscle tissue fought for space with scar tissue. The hope was that as Ari got bigger and stronger, so would his heart. That as he grew, muscle tissue would grow, making the scar tissue insignificant. 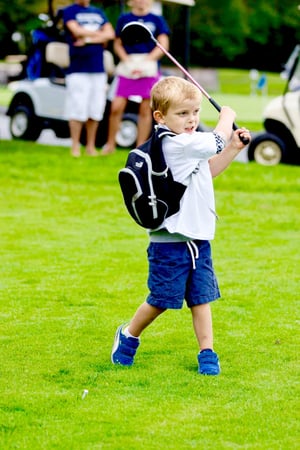 Any parent of a young child will tell you how remarkable and uniquely talented their child is—but there truly was something special about Ari. From the get-go, he was all in. He was a sports savant, born with a golf club in his hand and spikes on his feet.

Baseball, basketball, football, hockey, and golf were Ari’s big five, and he was deeply fanatical about all of them. When he picked up a ball, any ball, he knew what to do with it. As first-time parents, we didn’t see it as unusual. People would tell us, “Wow, he’s really talented!” We just shrugged it off.

We should have known he was off the charts when the dads gathered around him as he drained hoops at the playground as a one-year-old. 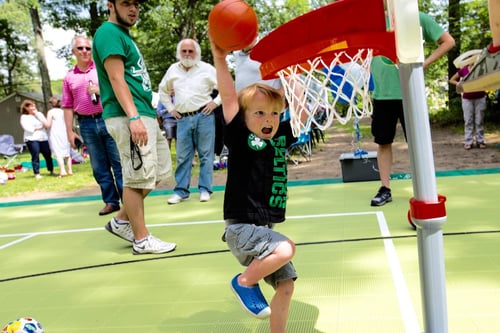 Just before Ari’s third birthday, Make-A-Wish volunteers came by to grant him his wish. When they asked what he wanted, he told them, “I want a basketball court in my backyard.” You could see them thinking, “Yeah, right, sure you do, kid.” He then proceeded to play basketball in front of them for two hours, calling out, “Paul Pierce for three . . . got it!” and showing them his Dirk Nowitzki moves: “Back to the basket, shake and bake, fall away, and SWISH!”

Ari was a boy on the move, packing action into every minute of his life. Over the course of five and a half years after Ari was born, he spent about 430 nights in the hospital. This meant we (one or both of us together) also spent 430 nights at the hospital.

Lots of days we lived a hot war: all of us gearing up for surgery, Ari waking up from surgery, Ari not doing well, and so on. But there were also quiet days: say, the week after a big surgery when he was still a baby. The doctors would tell us, “He looks good. We’re going to keep him sedated and let him rest for the day. You guys take a breather. Nothing is likely to happen for a while.”

There we were, on 8 South, the Cardiac Intensive Care Unit (CICU), with a sleeping, recovering, sedated baby boy and sixteen hours to kill at his bedside or down the hall. So . . . get some work done! Right?

Then there’s the constant flow of families—talking, laughing, crying. Beeps: alarms, infusion pumps, reminders, errors, and general use noises. And the phone: calls, messages, emails, social media. Always medical emergencies and codes where the war was happening around us—not at us, but still, it would shake us to our core.

On the bright side, we could work from the hospital. Could we, however, work at the hospital? Could we actually get anything done there?

Saying cardiac intensive care is a distracting place is like saying the sun is on the warm side. As far as getting work done went, it wasn’t just the hospital environment, it was the environment between our ears and in our hearts. Could we work when our emotions were whipping from devastated to hopeful to afraid to terrified to angry and back to hopeful again—every fifteen minutes?

It was draining. But when things were quietish with Ari, we had no choice. We couldn’t just tinker around and get some work done. We had to produce . . . deliver . . . achieve, or our lives would crash and burn in another area. We had one dumpster fire burning in our living room. We didn’t think we could handle a second one.

So to work we went: from the bedside, the hallway, the family room, the cafeteria, the lobby. (It was nice of them to let us use the hospital as an office for free, as long as we were “renting” CICU bed space 2 for $10,000 a day between $200,000 surgeries. Very accommodating.)

Why do we spend our time doing what we do? How can we get the most out of our time? What’s truly important? How do we want to live? On September 28, 2011, our turning point, we started a new journey that—though we had no idea of it at the time—would lead us to obsess over these questions, as life and death hung in the balance. Many times.

Until this date, we lived rather formulaic lives. We worked hard in school and got good grades. Excelled in sports. Went to good colleges. By all measures we were succeeding. We got married, bought a house, rebuilt it almost from scratch, started a successful business.

We subscribed to the formula:

We made effort. We achieved. But were we happy?

But then we got knocked down, again and again. Remember when we worked all day, worked out all night, and did fun things on the weekends? Hah! Us, too. Vaguely. When Ari was diagnosed, we did everything we could to learn about and understand his condition. We questioned the doctors, talked to other heart parents, and consumed every piece of information we could find. 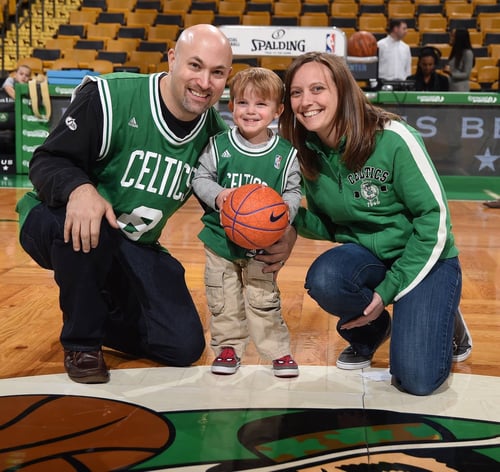 I immersed myself in the therapies that would help him. My days were filled with physical therapy, occupational therapy, feeding therapy, playgroups, and individualized education programs. I thought that if I could learn enough, I could control what was going on and I could control the outcome. After all, that’s how everything else in my life had gone. I worked hard and good things happened. I thought I could “effort” through anything. I thought I could save him.

I could not save him.

The brightest light went dark. When he died, we did too. And when we realized we were still, in fact, alive, we wished we weren’t. We didn’t understand how he could have gone through so much, and we could have tried so hard, only to fail. This was not supposed to happen.

Walking out of that hospital without Ari was one of the hardest things I’ve ever had to do. We got home and picked his Red Sox shirt up off the living room floor. Silenced the alarm that told us it was time for his 9 pm meds. Closed his copy of Harry Potter and the Prisoner of Azkaban on page 213. Forever.

Would we ever get through this?

At times I didn’t want to get through it if it meant having to let go of Ari in any way. Finding joy. Finding happiness. Finding peace. Finding our way back to living life. These weren’t even considerations. We fell into a very dark place.

Rediscovery of light in our lives was not a foregone conclusion. For the first year after Ari’s death, and a bit beyond, the struggle tore us down. Yet suffering led to a path we did not expect.

Deep down, we knew Ari wouldn’t want this for us. He would want us to be happy. He would want us to live—because he had lived each day to the fullest. And then some. He’d want us to fill our days with baseball diamonds, Harry Potter, Luke Skywalker, and eighteen holes. Ari was still our bright light, cutting through our darkness, showing us the way.

Some fans make an instant impact on our team. Ari Schultz, with his optimism & unbridled excitement, is at the top. We'll miss you, Ari. pic.twitter.com/MIQrbE7ZZ7


And we had a lot to live for. Two amazing children, though they also struggled with the death of their brother. Wonderful family and friends who supported us through incredibly challenging times. A successful business that continued to grow and thrive.

Eventually we found we had purpose.

That purpose includes sharing our story and teaching others what we learned and how we learned it, with the hope that it will make their lives better. And that’s why we’re writing this book—so you can live better, too. Richer. More successful. More fulfilled. Happier.

This post was adapted from Not Today: The 9 Habits of Extreme Productivity by Erica and Mike Schultz. Now available wherever books are sold. 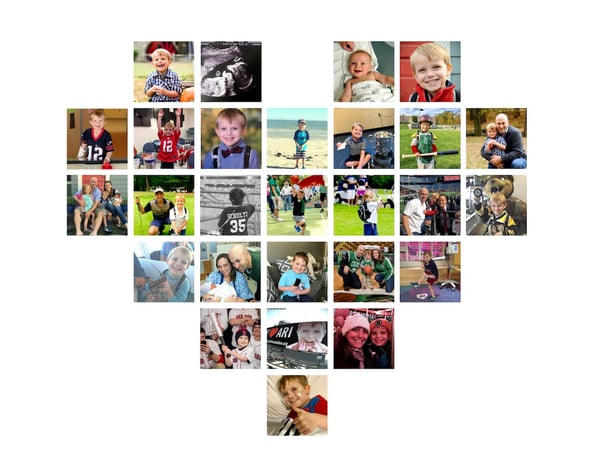