For the last 50 or so years, consultative selling has been the go-to approach for most sellers.

In traditional consultative selling, the buyer states a need and the seller positions their offerings as solutions to problems. This used to be enough to win the sale. But today’s buyers often perceive sellers and their capabilities to be somewhat interchangeable.1 This leaves sellers stuck in a capabilities battle, fighting price pressure.

The traditional consultative sale, with the need defined by the buyer, looks like this: 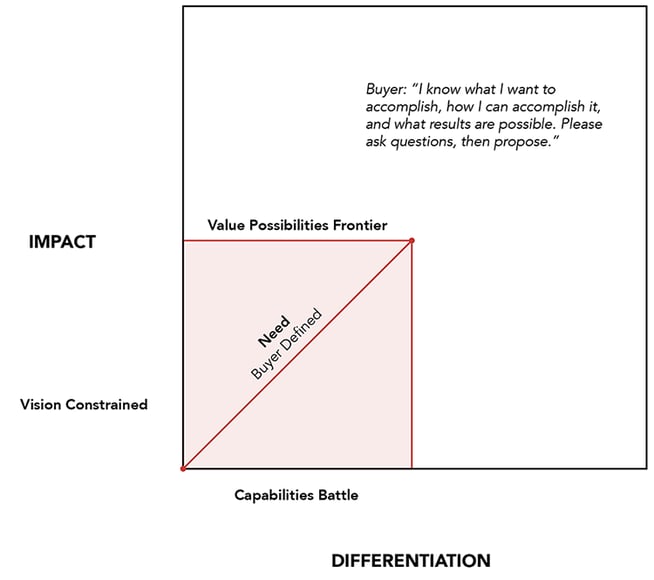 So what can sellers do to break out of this echo chamber, avoid discounting, and differentiate themselves to win more often?

W. Chan Kim and Renée Maugorgne, the authors of Blue Ocean Strategy, one of the most popular business books in recent memory, argue that companies "succeed not by battling competitors, but rather by creating 'blue oceans' of uncontested market space. They assert that these strategic moves create a leap in value for the company, its buyers, and its employees while making the competition irrelevant."23

In sales, this means that sellers need to create a surge in value for the buyer. When they do so, they make themselves categorically distinct. This is where the future of consultative selling comes in. (Read our latest white paper on this topic, The Future of Consultative Selling.)

Sellers who win go beyond traditional consultative selling. They inspire buyers with new ideas and perspectives. They question the status quo and don’t let buyer’s accept it, thus redefining the buyer’s reality and widening the possibilities by creating these ‘blue oceans.’

We call this kind of advanced consultative selling Insight Selling. We’ve written a lot about Insight Selling, which we define as the process of creating and winning sales opportunities, and inspiring buyers and driving change, with ideas that matter.

Read more: What is Insight Selling?

The net effect is the seller makes the leap from the red ocean (traditional consultative selling) to the blue ocean.

RAIN and the Blue Ocean

Since we first unveiled it in 2003, RAIN Selling has been our core consultative selling methodology. It’s about maximizing buyer value by discovering and solving hidden need along with stated need, and helping buyers visualize the most desirable New Reality for them. Our RAIN Selling model looks like this:

Here's how advanced consultative, or insight selling, looks and can be applied through the lens of the RAIN model:

When selling, don't just uncover needs—add value by redefining them. Show the buyer the impact they can achieve by establishing a New Reality they didn’t know was possible.

In doing so, you will unleash impact and value unexpectedly. You will be categorically different from other sellers, putting yourself in the best postion to win because of the value you, as a seller, bring to the table.