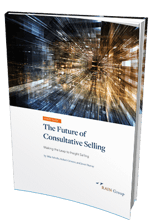 In the past handful of years, however, selling has changed more than it did in the previous forty. It’s changed so much that some respected selling experts and business journals are calling to replace consultative selling altogether, blow it up and do something completely different. Others claim it’s still relevant today—it just needs to change.

In this white paper, RAIN Group President Mike Schultz, Vice President Bob Croston, and APAC Practice Director Jason Murray propose a new definition of consultative selling, and take a close look at the future and what you need to do to win in the new sales environment. You’ll learn:

Selling like it’s 1987 (or even 2007) doesn’t work like it used to. Read The Future of Consultative Selling and find out what’s working today and what will work in the future.